The Borgata opened its doors on the 2nd of July 2003 and has undergone renovations in 2005; 2007 and 2011. The establishment is owned by Marina District Development, which is a collaboration between Boyd Gaming and MGM Resorts International.

Hotel and Casino Features of the Borgata

The main hotel tower of The Borgata is Atlantic City’s third tallest building and is seen from a far distance, as the façade is made up of reflective gold glass. The establishment was renovated in late 2005 to include a retail wing and Atlantic City’s largest poker room. In 2008 a second 800 room hotel called The Water Club was opened.

The casino has 161 000 sq. ft. of gaming floor space and has more than 3 000 slot machines of all varieties, 50 poker tables and over 180 table games including Texas hold ‘em; baccarat; craps; roulette; blackjack; pai gow and more. 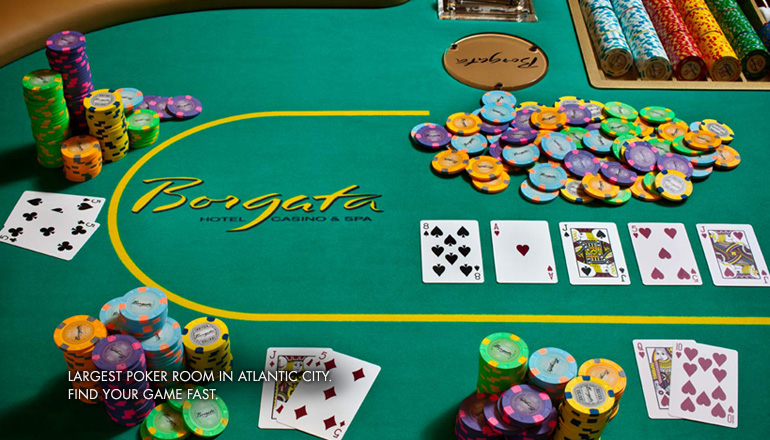 The establishment features a 100 seat Racebook with individual flat screens for thoroughbred harness racing and a poker room that hosts daily poker tournaments as well as high stake poker tournaments which are held in conjunction with the World Poker Tour.

The Borgata offers an exclusive players card which earns comps based on game play at the casino, various hotel room offers and free parking in both the self-parking and valet parking areas amongst a host of other rewards for points earned.

Amenities Available at the Borgata

There are a variety of amenities at The Borgata including two fitness centres; two spas; five pools both indoor and outdoor and range of boutique shops.

The two spas include Spa Toccare, which offers a range of massage and beauty treatments, and the second spa is the two story Immersion spa which is situated on the 32nd floor. Immersion offers 16 experience rooms offering a range of body treatments; massage and skin care services. Both a salon and a barbershop are available for men and women’s hair; face and nail services.

The Borgata Dining and Entertainment

There is a range of different bars available within the establishment including a poolside bar at The Water Club; a bar that is dedicated to the Racebook; a cocktail bar and lounge; piano bar and live music bars. There are also several restaurant bars. The property has a festival park that is an outdoor venue with two stages.

Fine dining at The Borgata is provided by five restaurants. These include Old Homestead, which is a restaurant also located in New York City; a Japanese cuisine and pub style restaurant; Fornelletto which is an Italian restaurant by Chef Stephen Kalt; Bobby Flay Steak and Wolfgang Puck American Grille.

The casino has about six different casual restaurants and there is a food court on the lower level, which provides about seven different eateries. Another casual restaurant is also located in The Water Club’s lobby. Most of the casual dining establishments cater to players at the casino and remain open longer than average as the casino is open twenty four hours a day, seven days a week.